Italian, Pizza
How to Find Us
Sample Menu
Contacts 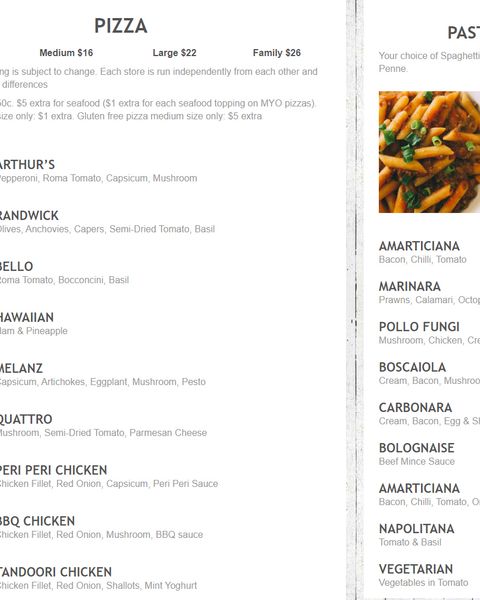 Some locations are so iconic that they don’t need an introduction. Think places like The Rocks. The Sydney Harbour Bridge. And then there’s Arthur’s Pizza.

Arthur’s is a part of Sydney’s history. This restaurant was first established in Charing Cross back in 1970. Arthur himself was one of the first to use the conveyor belt-style of oven to get pizza to the bell bottom-wearing masses quickly without sacrificing when it came to taste.

In fact, taste is what Arthur’s Pizza does best. Arthur set the standard when it came to pizza ingredients, enticing locals to stray from the usual cheese, tomato and olive options. He tempted and teased with seafood, mushroom, pepperoni and other exciting flavour combinations that quickly converted restaurant visitors to superfans.

Yet the principles of Arthur’s remain the same—it’s a great pizza parlour that strays from the traditional Italian flavours and instead celebrates a menu that’s uniquely Sydney. It’s the perfect place to enjoy a casual meal and a bevvy with your mates or a date.

The Moshen Restaurant and Lounge