Fusion, Indian
How to Find Us
Sample Menu
Contacts 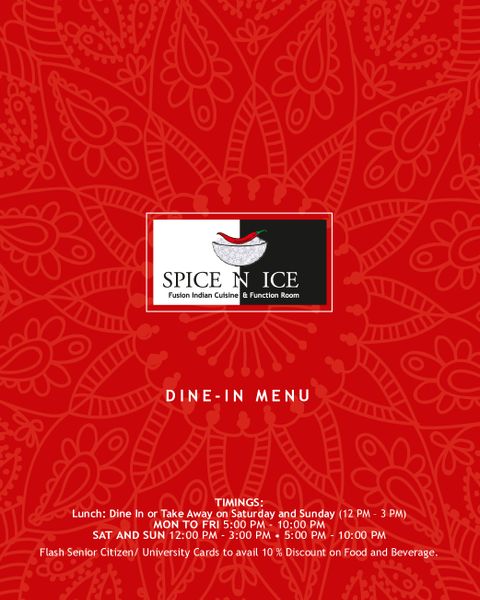 Whether you like your Indian food cool as a cucumber or hot enough to make your eyes water, Spice n Ice are experts in preparing dishes just the way you like them.

The restaurant itself reflects the latter half of its name. Crisp white walls and tablecloths, plenty of natural light and minimalist décor make this a soothing place to hang out. Not only that, it has a rustic alcove with old wooden panelling, a wonderful example of traditional meets modern. The spice element? Wait until you've seen the menu!

Catering for vegetarians and meat-lovers alike, there really is something for everyone. Meaty mains include perfectly cooked classics like Butter Chicken and Beef Vindaloo as well as the adventurous Duck Shank Curry and Goat Curry. Vegetarians can lose themselves in the intense flavours of the Saag Paneer and Pumpkin Madras, maybe with a fluffy naan (of which there are many) or with a crispy poppadum. You decide.

And the uniting force between vegetarians and meat lovers; beer. With heaps of imported bottles, the tough decisions don't stop at the food menu.

Sammys on the Marina

Seafire on the Marina

Junipers On The Marina

The Crown and Sceptre